You Have the Right to Remain Silent … Tom Leins

The police van dawdled round Paignton as though it had nothing in the back but ice-cream and lollipops, but I could see Tom Leins through the back door’s grilled window. The van headed for the nearest prison to incarcerate this hardened criminal, not that you’d guess from the grin on his face.

I shoved the binoculars in the glove box and pounded the accelerator. Up Esplanade Road I hit my target – the rear right corner of the van. I hoped to spin the van to a stop, but the driver had been to a driving school for this sort of event. He handbrake-turned on Adelphi and ran through a plate glass window two startled fellas carried across the road. We hit more cliches, but the bambino in the pram survived. Relief.

A guardsman looked out the back of the van, worry blotched across his face. Behind him, Leins sat as serene as a Bahamian sunset.

I had to stop that van before a cop swarm stung. I aimed my gun at the van’s back tire, but a car hit me and did its best to drive me off tight-as-a-duck’s-arse Queen’s Road. I scanned for the blue lights but my attacker was from another blogsite. Bastard.

Damn him to hell.

I let him charge side-by-side with me, where I calmly raised my shooter and pointed. I’d done enough. He swerved, hit a ramp with just the two right-hand wheels. He slammed, upside down, into a wall.

The police van pretended to go right, swerved left, and turned right. You can’t shake me that easy, sunshine. I rammed the vehicle just-so on the next bend and the van swirled and spun and tumbled to a stop.

The driver had Supermanned out the front window. I yanked open the back door. The guard had his hands up. I’d have tied him up and coshed him but he jabbered on about being too young to die and mentioned he had a beautiful wife and kids, so tradition made me shoot him.

Tom Leins stood and squinted at the great outdoors, sniffed the salt from the sea, held out his hands for me to un-cuff him, and nodded. “You want some answers, eh?”

I whetted the end of my pencil and poised it above the pad. From the sound of the sirens in the distance and the carnage the coppers had to get through I reckoned we had about ten minutes.

Tom Leins writes brutal, beautiful fiction that gives your senses a good and proper rattle. He’s got a couple of novellas out, the excellent Skull Meat and the recently released Snuff Racket – both set in Paignton, England. He’s all over online magazines and anthologies, such as Spelk Fiction and Shotgun Honey, and he hosts the excellent Dirty Books blog. All Due Respect Books (part of Down & Out Books) will release his new work, Repetition Kills You in September this year.

You should get involved if you haven’t already.

Tom Leins (TL): That’s a tough question! I have plenty of non-reading friends, and while I would like to win them over one story at a time, I’m a very busy man…! There are probably fans of opera or sculpture or [insert other impenetrable art form] who think I’m a savage for deriving so much pleasure from grubby pulp paperbacks older than I am, so I will withhold judgement.

TL: A strong voice is key for me. Droll, quirky, aggressive – it doesn’t matter, as long as it is engaging and consistent. If a protagonist has a warped moral code and a violent streak that helps too, especially with the kind of books I enjoy reading.

TL: Quite the opposite. In crime fiction terms, a likeable protagonist can be a real hindrance, and flawed protagonists definitely rule the roost. Some kind of moral code helps – no matter how murky – but if you go too far in the other direction, you can end up with an amoral shit-bag, who no one in their right mind would root for. Striking a balance is really important.

Name a great antagonist, novel or movie, and what they do for you.

TL: Some of my favourite antagonists are the ones in J.G. Ballard novels – charismatic psychopaths who are fully committed to their lunatic visions. Men such as Dr. Robert Vaughn (Crash), Anthony Royal (High-Rise) and Bobby Crawford (Cocaine Nights). His everyman narrators are always drawn into the queasy orbits of these fascinating nut-jobs, and that is something I’m attempting with a couple of works-in-progress right now. Deranged antagonists are fascinating to write, but I do think that you need a stable footing before going off at the deep-end.

TL: Lazy writing. Last year I picked up a charity shop copy of a book by a bestselling crime writer, and he described the rain as ‘teeming’ four times in the first three pages. Suffice to say, I didn’t make it to page four… Clunky dialogue, paper-thin characterization and stodgy plotting are all massively off-putting. If you notch up all three then you are paddling in dark and dirty water.

TL: When I was younger I used to persevere no matter how teeth-grinding I was finding a book, but those days are long gone. One of the best things about having a Kindle is that if a book fails to hook me, there are dozens of other titles vying for my attention – flaunting their lurid covers in front of my tired eyes! I almost certainly abandon more books than I finish these days. Life is far too short to waste energy ploughing through something I’m not enjoying. People may not enjoy my books, but I’m pretty sure they will never be bored reading them!

TL: My over-active imagination! Plus, I write because it’s fun. When a writing project feels too much like hard work, I change tack and work on something else. After all, if it doesn’t excite me, how can I expect it to excite a reader?

But, yeah – a lot of stuff inspires me. Great books by my peers encourage me to raise my game. Quirky nuggets from news stories fuel the narrative fire. And people I encounter in Paignton tend to inspire a frankly terrifying number of fucked-up supporting characters! 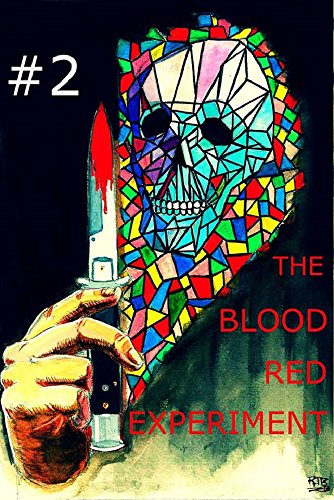 TL: My latest e-book, SNUFF RACKET, grew out of a serialized story I wrote for the neo-Giallo project The Blood Red Experiment. This format really suited me, and also forced me to embrace cliffhangers in a way that I never had before. Note to self: definitely use more cliffhangers!

TL: REPETITION KILLS YOU (All Due Respect) is a literary jigsaw puzzle, involving carnies and corrupt cops, sex offenders and serial killers, bare-knuckle fighters and pornographers. Welcome to Paignton Noir!

TL: If you want to find out about my fiction visit:

If you want to read my book reviews and author interviews visit:

If you want to be my friend visit:

Tom Leins is a disgraced ex-film critic from Paignton, UK. His short stories have been published by the likes of Akashic Books, Shotgun Honey, Near to the Knuckle, Flash Fiction Offensive, Pulp Metal Magazine, Horror Sleaze Trash and Spelk. A pair of Paignton Noir novelettes, Skull Meat and Snuff Racket, are available via Amazon. Repetition Kills You will be published by All Due Respect (an imprint of Down & Out Books) in September 2018. Find out more at:

For a snifter of Tom’s work, try out these beasts:

You can BUY City of Forts for a special pre-order price HERE.