Kate Laity slipped me easily. I reckoned I’d collared her in what used to be a HMV but she must have used a side exit to escape me and the muzak. No worries, I saw her hide behind the steam which jetted from the kebab joint next door. She turned and scampered down a side-street – shape-shifted to … Graham Wynd. Damn, she messed with my eyes, but I got a hand on Wynd’s foot as she hauled herself up a drain-pipe. She donkey-kicked and split my lip wide open, streaming red across my crisp white collar. She beamed down, her face all Kate Laity again. She reached the rooftop and danced between gaps in broken glass and barbed wire. She leapt from a gutter just as it crumbled, and rolled off her landing. I kept to her coat tails and ignored my limp the best I could.

There, I had her. She turned, Graham Wynd again. I had her trapped, her back against the wall of a dead-end alleyway. She morphed to Kate Laity for the last time and cocked an eyebrow at me, as if she had me trapped. She slipped a fag in her mouth and lit it. Puffed the smoke in circles my way to target me.

“What do you want?” she said. Her American twang had Scottish flavour.

“I just want to ask a bunch of questions.” I hunched over, hands on knees, dragging air into my wasted lungs.

“Well, why didn’t you just say that, daft lad?”

She opened a brick-shaded door I’d not made out in the low light and invited me into her crime lair. I entered before her, wary of a cosh to the neck. I needn’t have worried. She plied me with rum and settled into the sofa.

Kate Laity is Kate Laity, and she is Graham Wynd. Her work is vast and varied, from noir to witches, to erotica. She wrote one of my favourite short stories ever – A Secret Place, which you can find in her excellent collection, Unquiet Dreams. 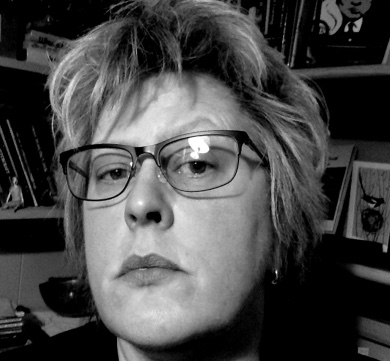 Kate Laity (KL): Just a heartfelt pity for their blinkered lack of imagination. We construct ‘reality’ all the time. That’s how we got to the mess we’re in. ‘Hey, look at this disastrous thing happening to the economy/education/health care/planet—we need to change our ways.’ ‘LOL, fake news, suckers [starts fracking].’

KL: A sense of humour. Seriously, if they make me laugh I’ll hang out for a good while. Goes for life, too. People who make me laugh are winners.

KL: No. What’s the point of reading nice people? I want to live vicarious lives in books, things I would never do because I am more or less nice.

KL: Because it’s fresh in my mind, Lise from Muriel Spark’s The Driver’s Seat. There is no one quite like her. Definitely not likeable. It’s hard to tell at times whether she is just insane or so outside normal that she can’t even pretend to wear the suit of it. She runs pell-mell into her own destruction with a savage glee. It’s an astounding book. Audacious.

KL: A writer wanting me to swallow stupidity and pretend it’s not. Misogyny—anything from the catalogue of the usual limitations of small minds. If you’re writing for the Daily Fail’s audience, it’s not for me. 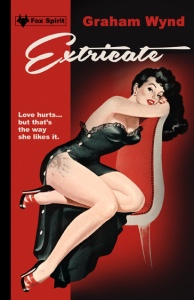 KL: Oh god no. Life’s too short for bad books. Chuck it and move on.

What gets you writing? Is it a great novel, maybe? Something you saw on the street or on TV? Something else?

KL: Honestly at this point it’s a habit so deeply ingrained I could never stop without going mad. I have a billion ideas every morning and the hard part is sorting out what I should actually write today.

KL: That I can’t always write what I set out to do. Anger is an energy but something more has to fuel it if you want to keep going. A short story can run on a notion, a gripe or a joke, but a novel needs structure and an arc of suspense to keep a reader interested.

Kate Laity: My giallo-inspired novella Madonna of the Wasps will be out in print soon as part of the Blood Red Experiment from the Near to the Knuckle crew. My next book is out later this year from Fox Spirit. Mangled is a retelling of an old fairy tale The Girl without Hands. It incorporates some medieval texts in its freewheeling scope, but also a wide range of fairy tales and miracle stories. More than a bit grim (or Grimm).

Graham Wynd: Love is a Grift will be out from Fox Spirit later this year; it’s a novella that chases across Europe in pursuit of a femme fatale. Just when you think you can trust her, the doubts multiply. It will be collected with a bunch of short stories. Also my pulpy occult thriller Satan’s Sorority is getting a second life with Fahrenheit 13.

You can get your fingerprints all over Kate Laity’s books HERE,

For a taste of her work, try this short story: Guide Me Soft.

You can get your hands on City of Forts for a special pre-order price. Buy it here now.