You Have the Right to Remain Silent … Gabriel Valjan

Today I grabbed the writer Gabriel Valjan off the street and shoved him into the back of my van. I did a few 360 degree spins and some harsh hair-pin turns to shake him up a bit before I half-blinded him with a hot lamp in his face.

Turned out there was no need – he’s happy to talk, but you must always make sure.

Be careful he doesn’t dope-slap you. 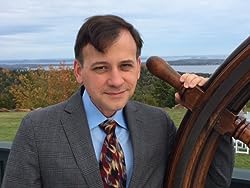 Gabriel Valjan (GJ): Part of me would be sad, the other part would want to Dope Slap some sense into the person. Unfortunately, if I am to believe the statistics, few Americans read a novel after college. Okay, fiction is ‘made-up,’ but even nonfiction requires an interpretation of human behavior and events. All writing is predicated on observation and conjecture: the How and Why we respond to the world around us, and to each other. Remember Rashomon? No two people ‘see’ the same thing the same way. I find that fascinating. Good writing also engages all our senses. Books from the past illustrate attitudes and mores from another era. As a reader, I respect a talent that takes me elsewhere, teaches me something from outside my own purview. I’d try to remind our blinkered friend here that books have changed the world. Think of Uncle Tom’s Cabin or Beloved and racial injustice, Silent Spring and the environment, or 1984 and totalitarianism. As a writer, I appreciate how another wordsmith demonstrates their relationship with language, their command of craft. At the barest minimum, our philistine misses an opportunity for entertainment without commercials.

GJ: Some unique quality, such as a sense of humor, an eccentricity of some sort. I don’t have to like everything about him or her, but give me a reason, a situation that would make me want to root for them.

Do you need a likable protagonist?

GJ: No. I can accept a flaw, a great weakness, because I think it enlarges the humanity of the character. Likable can also be too safe, absent of conflict, and plain – not interesting.

GJ: Let’s pick a television series since there’s a good chance people will know it. For my antagonist, I’d select Walter White from Breaking Bad. He’s a brilliant man, a school teacher, who has lived a very safe, very milquetoast existence until he’s diagnosed with lung cancer. He’s worried the medical bills will leave his family destitute, so he parlays his knowledge of chemistry into producing the best methamphetamine in the southwest. Walter becomes a ruthless drug czar, the best at what he does because he has nothing to lose.

The writing is phenomenal, in my opinion. Each installment is tense, and you, the viewer, must know the links in the chain of events from one episode to the next. On second viewing, you’ll realize each character has a motive – the principle one being Family – and each is flawed. Walter’s nemeses are Hank, his DEA brother-in-law, and Gus Fring, a criminal mastermind with his own compelling backstory and motivation.

What I learned from watching Breaking Bad and transferred to my own writing is how to write multiple character arcs in a series. So, instead of writing a novel, I’ll write five novels, and I’ll map out each character arc so readers will witness several trajectories; it’s a lot of writing and revision to have the overall schematic in your head, but having this architectural approach to writing a series has been so much fun for me because I can tinker with pacing, modulate tension, and experiment with when to set something aside and then revisit it later. It’s difficult to explain but it feels like a breakthrough in my own creativity.

GJ: Writers who don’t tell a story. There are writers out there who want to impress you with what they know, or their vocabulary, or their ability to write long winding paragraphs because they have a massive Ego. Their intellect is supposed to blind me. Yawn. I take the view that I should disappear into the story and when I close the book, I want to know what else this person has written. If I look up from the page and ask myself, “What did I just read?” or “I read x-number of pages, and this has gone nowhere,” then that book goes out the proverbial window.

GJ: Am I masochist? Great question. When I read someone else, I suspend The Writer’s Voice inside my head. I try not to think how I would write the same scene, or whatever is on the page because that’d be unfair to the writer. ‘Dodgy’ can mean a lot of things. Great premise, terrible execution. Great character, compelling story, but crappy editing, or wonky digital formatting. I read for Story and if the writing is terrible, I won’t grind my teeth. Out the window it goes.

What gets you writing? A great novel, maybe? Something you saw on the street or on the TV? Something else?

GJ: Inspiration has come to me in different forms. A common turn of phrase – back in the day – inspired the story with that title in Paladins, the charity anthology in which we both contributed yarns. I’ve watched people in conversation from a distance and imagined the dialog. Another example is to take a basic idea and ask, “What if?” Once I start writing, I tend to think in scenes and I’ll lay them down like playing cards.

GJ: The last book, The Good Man, was set in 1948, so research was crucial for authenticity. I read up on cinema, on fashion, on military history, on weapons, and the layout of Vienna, and who lived where at the time. Vienna was a divided city after the war. The next challenge was layering the information so readers didn’t feel as if they were receiving a lecture. Details create texture and the right details can convey a character’s personality.

GJ: A shady Hollywood script fixer is murdered, the LAPD has a database, and J. Edgar Hoover wants it and anything Communist. Blacklists, paranoia, and divided loyalties drive The Naming Game.

You can find Gabriel’s books at numerous retailers, including here at Amazon US and UK.

City of Forts is now available for pre-order. BUY NOW for the special PRE-ORDER price.